A centenary toast for the mission of PEN

On 5th October 1921, in a clear reaction to the evils of the first world war, English writer, playwright and poet Catharine Dawson Scott invited writers from London to the first PEN dinner. The invitation had both a spirit of international literary fraternity and a clear feminist perspective: « London has no centre where well-known writers of both sexes can meet socially, no place where distinguished visitors from abroad can hope to find them. As a dinner-club would supply this need, it is proposed to start one. » John Galsworthy, the first president of PEN (and the first major donor), lifted his glass to writers from all the corners of the world and said: «We writers are in some sort trustees for human nature. If we are narrow and prejudiced, we harm the human race. And the better we know each other, the greater the chance of human happiness in a world not, as yet, too happy. »

A hundred years later, at the closing ceremony of the 87th PEN International Centenary Congress, the newly elected President of PEN International, Kurdish writer and lawyer Burhan Sönmez, raised his glass and repeated exactly the same words, just adding: «So we have a mission! Congratulations to all in our centenary!» 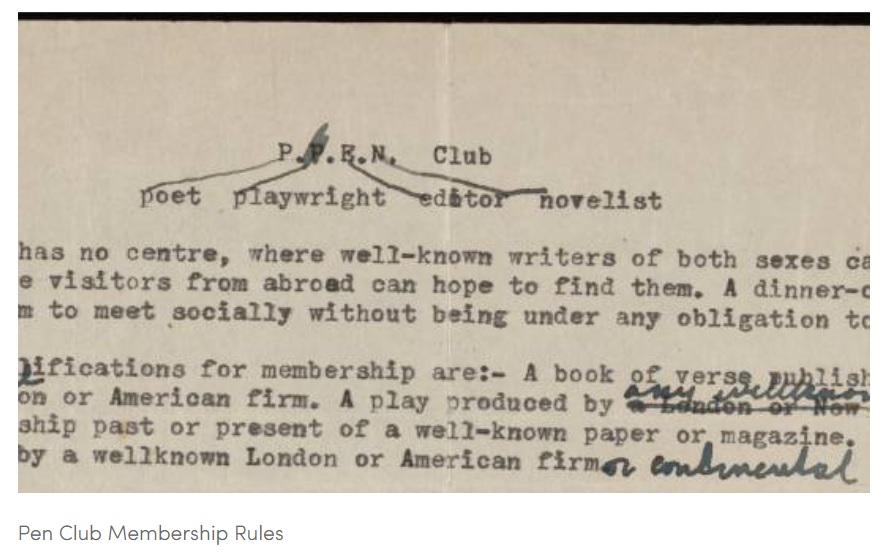 A celebration of radical equality among literatures

This year’s Centenary Congress, showcased the commitment of PEN to promote all literatures without exception —without frontiers, in line with the principles and spirit of the PEN Charter. Among others, the Assembly of Delegates elected Burhan Sönmez as president of PEN International —just a few minutes before PEN Tibet and PEN Chiapas thanked American-Mexican author Jennifer Clement for her six years’ presidency of PEN International. States’ frontiers, clearly, are unknown to literature.

The Assembly welcomed, together with the new PEN Malta, a new PEN Quechua, the third PEN Centre devoted to authors in the indigenous literatures of the Americas. It also gave the floor to writers, former PEN’s cases and activists who spoke about PEN’s history and key moments, among them writer Ngugi wa Thiong’o, who reminded us that the debates at the 34th PEN International Congress were the beginning of a thought process which would lead him to embrace the use of Gĩkũyũ, his mother tongue, as the language of his creative imagination. «Most of these (Ngugi’s mentions three novels, one epic, two plays and several stories for children) have been translated into numerous world languages, which mean that my mother tongue, Gĩkũyũ, an African Language, is in conversation with other languages of the earth…I have faced prison, and exile and even death threats for my stand. But I don’t wish it otherwise. Thank you PEN, » Ngugi said.

A celebration against hate

In a passionate inaugural Graeme Gibson lecture at congress, Margaret Atwood and Omar el Akkad explored the role of literary dystopias as a form of revelation of present-day societies where hate is in expansion. On the same day, mirroring those dystopias, congress resolutions were approved in defence of freedom of expression in Myanmar, Belarus, Nicaragua and Israel/OPT.

Three winners of PEN/Oxfam-Novib Freedom of Expression Award —Enoh Meyomesse, Can Dündar and Dareen Tatour— discussed their experience of imprisonment and the importance of solidarity, as they received it from PEN Centres worldwide. This tension, the tension within a community built over time to promote international solidarity with our imprisoned or persecuted colleagues, was highlighted by the debate between Salman Rushdie and Carolin Emcke, moderated by Salil Tripathi. Their conversation was full of nuances and it focused on the need to guarantee freedom of expression while countering hate speech.

The theme of hate speech was also explored by Anne Appelbaum, in conversation with Sofi Oksanen and Anders Kompass, who reflected on its historical roots, its increasing expansion in today’s internet and the need for good practices in the use of social media —still under development. The third point of the PEN Charter states that PEN members « pledge themselves to do their utmost to dispel all hatreds and to champion the ideal of one humanity living in peace and equality in one world. » Two weeks ago, the PEN Centenary congress made a solemn pledge against hate —and raised a glass to freedom of words and imagination for the new PEN century!